How did the kid with poor social skills from Kibbutz Kfar Ruppin who almost dropped out of school become an educator who now dreams of becoming a teacher and principal in an educational institution? 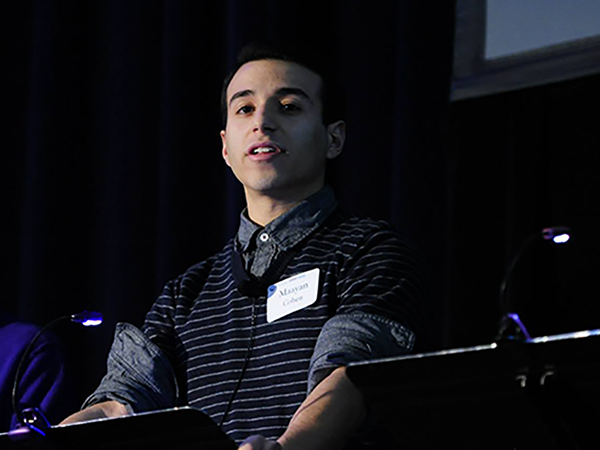 As a kid growing up in Kibbutz Kfar Ruppin in the Valley of Springs, Maayan Cohen struggled with significant social and personal difficulties. He couldn’t get along socially with other children in his age group, he had difficulty coping with emotional issues, and he would often go into angry rages, breaking down into crying fits, and even becoming violent at times. Maayan's distress was so great that he considered dropping out of school at one point.

Because of the many difficulties he was facing, Maayan was integrated into the Youth Futures program when he began fifth grade. As a participant in the program, Maayan was assigned a mentor, an emotional and social coach, who worked closely with him for three years in school and during afterschool hours, to help him acquire the tools and self-confidence he needed to realize his potential and succeed.

"My mentor Suzanna sought to connect me socially to other children in the region, in my class, and in my homeroom, and to teach me how to integrate into society. At the time, I was really lacking a lot of life tools and my social interactions were unbalanced, which made me become unglued so often," he explained.

Joining the Youth Futures program was truly a life-saving gift for him.

His mentor helped him understand that there were things in his life that could be improved. She helped him to believe that he was not damaged goods, and that he was indeed capable of forming social bonds and dealing with his own difficulties. Following the close guidance of his mentor, Maayan learned how to fit in socially and succeed in his studies. He completed high school successfully with full matriculation, and even extended his studies to include Arabic, biology, and theater.

Through Youth Futures, a subsidiary of the Jewish Agency for Israel, he even volunteered to do a year of pre-army service as a shinshin emissary to the Jewish community in Cleveland. Maayan shared his story with the children and youth counselors in the Cleveland community, explained to them that he was a Youth Futures graduate and how much he benefitted from and was empowered by the assistance he received from his YF mentor as a child.

During his time in the US, he empowered the children he worked with using the tools he himself had acquired as part of Youth Futures. After returning to Israel, he continued to flourish and succeeded in his military service too, integrating well into his position and even rising to the role of position of a commander in the Home Front Command's Search and Rescue unit as a staff sergeant. After his military service, he worked for a year as a teen counselor for at-risk youth.

Maayan is now 26. He lives in Kibbutz Kfar Ruppin with his fiancée and works in the kibbutz's informal education system as a counselor for first-to-third graders. He believes in the value of the informal education on the kibbutz, which takes place primarily during afterschool hours. In his opinion, the very fact that children get off the school bus and go to the children's activity center for an hour or two, enjoying a variety of creative and group activities, connects them to the kibbutz, to kibbutz values, and to the community.

"Today, I can’t imagine myself working at a job that doesn’t involve children. I can see myself as a teacher working in one type of a school or another, and after that in a managerial position in the education field," says Maayan.

Youth Futures is an organization that has been operating since 2006 in 36 towns, cities, and regional councils in the social and geographical periphery of Israel for at-risk children and families. Youth Futures seeks to provide children and their families with security, life tools, and equal opportunities to realize their inherent potential, while improving access to social services, encouraging family involvement, and creating a supportive educational environment.

For more information on Youth Futures, contact Tal Rothstein at trothstein@jewishcleveland.org or 216-593-2861.