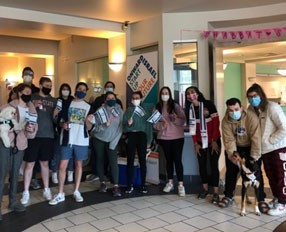 Israel.Cleveland.Next (icnext) is two-year program that brings together Cleveland’s Jewish high school teens from all denominations. The program, a project of the Jewish Federation of Cleveland and run by @akiva, a Federation beneficiary agency, teaches students about the core issues of Israeli society and the geopolitical situation in Israel today through seminars, speakers, open conversation, writing assignments, a Mifgash (encounter with Israelis) with teens from the Beit Shean/Valley of Springs region, and a 10-day fact finding trip to Israel.

“icnext gives students the confidence and push they need to go on and continue to confront antisemitism and anti-Israel rhetoric when they leave home after high school,” said Tina Keller, Associate Director of @akiva. “These can be difficult and intimidating conversations, so we enable them to begin and practice in a comfortable setting.”

Leah Marek, David Mack, and Daniel Pearlman are a few recent icnext alumni who credit the program for equipping them to respond to acts of Jew hatred and anti-Israel efforts they faced on college campuses.

Leah, a Shaker Heights resident, encountered antisemitism various times on The Ohio State University’s campus. Her experience with icnext taught her how to look at issues and events from multiple lenses, and engage and make an impact through open conversation. 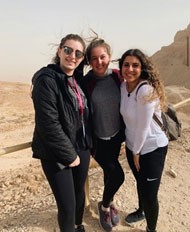 When she encountered a swastika drawn in the snow outside her dorm, she knew she could feel comfortable talking with the Hillel board and her fellow Jewish friends about why people commit acts of antisemitism and how they get away with it. "It was terrifying but having a community of other Jews available enabled me to stay strong and proud of my Jewish identity,” said Leah. Leah will be OSU Hillel’s co-president this upcoming school year, where she will help others find their Jewish community and safe space. “My experience with icnext taught me how integral community is in maintaining my Jewish pride,” Leah said.

David Mack of Shaker Heights will serve alongside Leah as co-president of Hillel at OSU this year. He particularly appreciated how icnext made Israel tangible for him. “Israel no longer felt like a faraway country on the other side of the world but rather a second home,” said David.

During David’s first semester at OSU, the organization Students for Justice in Palestine (SJP) was trying to pass a bill through student government in support of The Boycott, Divestment and Sanctions (BDS) movement which promotes boycotts, divestments, and economic sanctions against Israel. To try to block the bill, David, as well as other passionate Israel advocates, engaged in conversation with other faith and cultural groups across campus and local community leaders in Columbus. This is when David noticed his icnext experience come into play.

icnext gave him the historical and political facts he needed to make and refute arguments. “It is the real-life accounts that I received from icnext that made me feel confident and effective while speaking with other students and government officials,” David said.

Today, Daniel Pearlman is the director of the Jewish Community Relations Council at the Jewish Federation of Greater Toledo, where he oversees Israel advocacy engagement, government relations, Holocaust education, and more. But, in 2011, he was a Junior at Solon High School and an icnext participant.

When he went on to attend the University of Michigan, Daniel participated in various campus Israel advocacy groups that worked to combat BDS on three separate occasions. With each arrival of BDS, Daniel spoke to students one-on-one, encouraging them to vote against the bill. “In each conversation, I used a strategy that I learned during icnext, like the ARM strategy – address, reframe, message – I still use this strategy today in my current work,” explained Daniel. “icnext taught me the crucial skills for speaking with people you disagree with civilly but forcefully.

“If I had not participated in the education seminars and the trip to Israel through icnext, I would not have been as involved in Israel advocacy or Hillel at University of Michigan” Daniel continued. “Those experiences are what pushed me to do what I am doing now.”

icnext is now in its tenth cohort with over 200 alumni. Like Leah, David, and Daniel, icnext graduates are equipped to become active young leaders in fighting antisemitism and anti-Israel sentiment, both on college campuses and within Jewish communities across the country.

Stories like this are possible because of your support in our annual Campaign. For more information contact Ilanit Gerblich Kalir at 216-593-2815. or ikalir@jcfcleve.org.